So I have been coming to K K Malaysia since i was at University and that is over 10 years ago.  I remember when there was only 10 seats available to eat their food at, but as time went on and the building had a refurbishment they became larger and offered more seats.  However, people still think it is small and does not offer a lot of seats.  As time has gone on, I have noticed that the owners now no longer cook and they can be seen at the end of the night cashing up the till.  So as time has passed is it as good as it use to be.

I have had these numerous times, and I feel they are still the same as the use to be.  I know I lot of people do not like to eat around the bone, especially the wing, but my Por Por (my grandmother) always said that the wing was the sweetness part of the chicken and I have to agree.  Yes K K (Malaysia) do cook it for a while that the meat of the wing starts to disappear.  However, they do not batter the chicken and just season it and it is very nice. 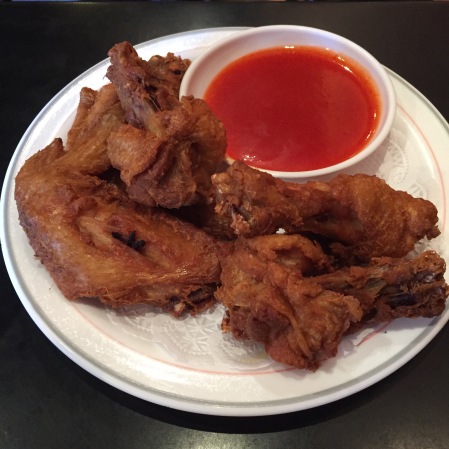 This is not as good as I have previously had it.  Yes the flavours are still the same and they add chicken, bean sprouts, chopped up prawns, slices of fish cakes.  However, I felt that they over cooked the rice noodles and was a bit too gluey for my liking.  Also I asked for hot and it did not even tickle my tongue, which I felt was a shame.

I do go to K K at least once every two month, you could say it is one of my favourite places to eat.  I usually order either the Curry Laksa, Mee Goreng or Hainanese Chicken Rice (fried).  All are very good and are all priced very well.  I do feel that the standard has slightly dropped.  However, it is not going to stop me from going as often as I do.