Buttercup and I decided to catch up before work started.  We usually go to the burbs to have brunch but I suggested to go into town as I needed to buy somethings in town.  We found a park in city and decided to go to Mama Browns as it was close to the car. 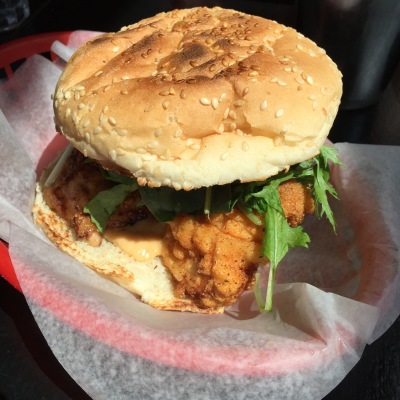 I was disappointed with the fries, they weren’t necessarily cooked long enough or the oil was not hot enough, i can’t put my finger on it.  We added the chipotle sauce to the fries and it was a nice.

I usually go for a thick shake but they don’t make them here, but when the milkshake came out it was thick.  There were crushed kit kat pieces on top and the milkshake had chocolate and caramel mixed together.  A nice milkshake.

Overall this place is not bad.  It has a very relaxed feel to it.  However, the waiting stuff seemed a bit too relaxed for my liking.  The only reason I bring this up was because our food came first before the drinks.  I did find that rather weird and something you usually do not see very often.  It just seemed like the person that was making drinks was super slow and could not keep up with the orders.

One thought on “Mama Brown – Wellington”