Went back to The Tasting Room for afterwork drinks and for a lightish dinner with co-workers. It has been a really long time since I have been here. Even though the decor has stayed the same, things have definitely changed. One of them is that there is definitely a lot less people visiting this place. 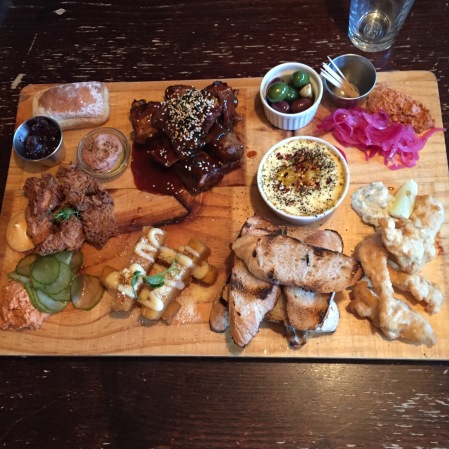 First thing I picked off the platter was the Buttermilk Fried Chicken. This was really nice and the sauce that came with it matched the chicken really well. It was tender and had a bit of a kick to it.

Next was the Polenta fries. These were good as well. The aioli that went with it gave the polenta more of a flavour. They were slightly crisp and there was parmesan sprinkled over the top.

The cheese fondue was next and not as good as I remembered it to be. The fondue was not as thick and there was no nice crust on the top. The fondue still had jalapenos and had a good punch to it. The toasted bread went really well with the fondue. It was difficult to eat though as the cheese just ran off the bread.

The Baby Back Ribs were the best thing on the platter. The meat was tender and had a really nice BBQ sauce coated on them.

The Fish Fingers were really disappointing. The fish was alright but the batter was soft and had no crunch. It was just soggy. The tarter sauce was alright, but the soggy fish just made the combination not good.

The pate was good and the loaf that came with it was good. However, the loaf was not big enough to accommodate how much pate you got.

Also on the plate were olives, which were nice. There was also pickled onions and some pickled cucumber. Also there was some housemade humus which was nice.

For a Fried Platter for $40 this was pretty reasonable. Three of us shared it and we were full afterwards. It was plated nicely and looked really appetising. Overall it was a good platter but could of been improved upon. While I was also there I was surprised to see how much the menu had changed and that now it is more like a bar menu not a dinner menu. Things have definitely changed and I do not think it is for the better.