Betty Boo felt like brunch and wanted someone to go, so I decided why not. We were both waiting for payday and I suggested Plum Cafe as I had not used my Entertainment book voucher there yet. On a Saturday and Sunday this place is usually packed for brunch. However, as we arrived before 11am on a Sunday getting a table was not all too difficult. 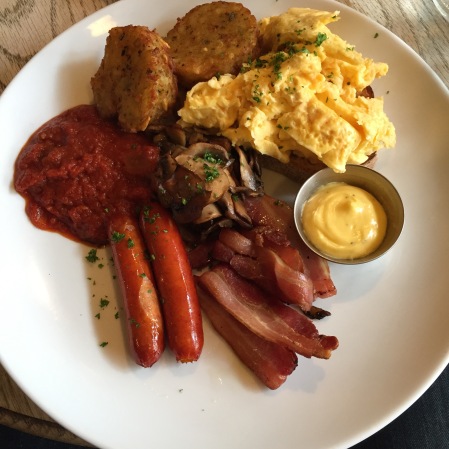 I was surprised to see what was on my plate. Not a wow surprised, but a more like OK this is what they put on their Big Breakfast surprised. I was mainly surprised because I thought I would get slices of tomatoes not a tomato puree/chutney. Also I thought I would get like a big mushroom or whole mushrooms instead of mushrooms finely chopped. I did like the mushrooms though, but not so much the roasted tomatoes. I decided to go for the scrambled eggs, which was nice as was the toast, hollandaise sauce and the kransky. The bacon was really nice and looked like it came from a butcher. I was disappointed with the hash browns as they were over seasoned with herb and was rather strong. 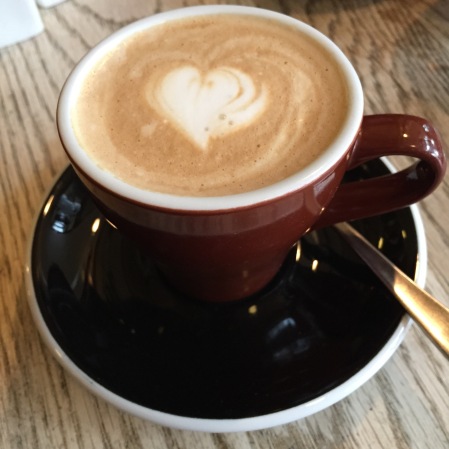 This flat white was alright not fantastic. I could instantly tell by the colour of the coffee. Was not as strong as I am use to and more like an Auckland coffee really but not as sweet.

I have been to Plum a couple of times but not for Brunch or lunch. The dinner menu is good and reliable. The brunch menu you can say is the same. The service is very good and the food came out really fast. I suppose they have mastered everything that food comes out in a fast manner. That could be why my mushrooms are cut thinly and the tomato was in a chutney. Overall I could say that this place is reliable and could be why so many people come here.