So this was a complete random place for us to try. Pepper Pott’s sister wanted to try the food trucks. However, we got the dates wrong and it was not on. So she then got to decide where next. She has not lived in Wellington for a while and does not really know the food scene and she liked the blurb of the Burger at the Glasshouse. Originally when the Glasshouse was mentioned I thought of the bar that was in Courtenay Place the closed a while back. I later discovered that it is actually in a Hotel in Thorndon. When we arrived it was relatively quite and I was apprehensive about this place 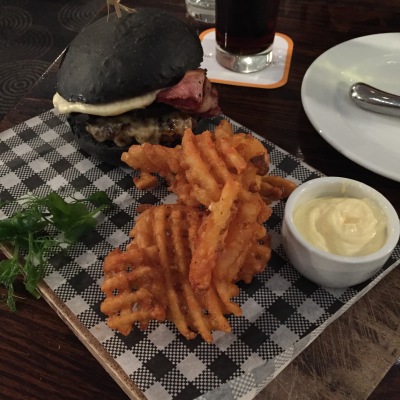 I shared this burger with Pepper Potts. It looked like a nice burger with the black bun and the white sauce slightly dripping off. I was surprised to see there were fries as it did not say anything on the menu and most places arrant adding them. For me the beef patty was over cooked and was quite dense. The black pudding was very nice as was the beetroot relish. The smoked cheddar was good and as was the triple smoked bacon.The brioche bun was also nice. The waffle fries were too salty me and was slightly overpowering

Overall a good burger with the black pudding and the beetroot relish being the star.

Ranking of Burgers so far;