Mulan organised myself and some of her crew to go see what Ti Kouka had to offer for their Wellington on a Plate; Burger Competition. Ti Kouka have always been rated as a popular choice for their burger entry and can be very hard to get a table to try it out. However, we went slightly early for lunch and though we didn’t manage to get a table in their main dinning area we were seated on one of their high tables with bar stools closer to he kitchen 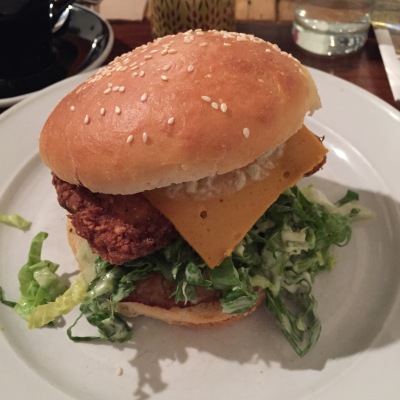 This looked really impressive when it came to the table and I was slightly worried how I was going to eat this with my hands. However, I took the plunge and took the burger on. This was a very impressive burger. The chicken was really moist and the flavour was awesome. The smoked cheese worked well and with the tomato jam, the tasso ham, and coleslaw this burger just sung. The bun was also good and spread inside the bun was a garlic butter. 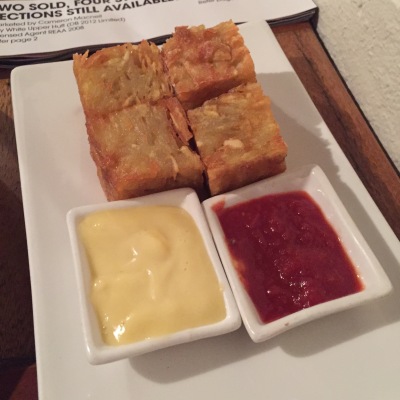 I like the hash brown at Ti Kouka, but my one thing that disappoints me with this side is there is no salt in the hash brown and you have to add it yourself. The sides sauces are good and the dish is a good cheaper and smaller alternative to the hand cut fries. 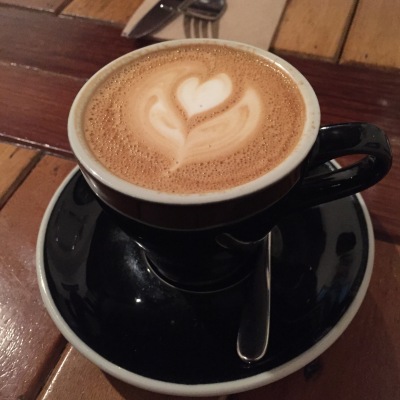 Ti Kouka use their own beans “Little Rabbit”, which is roasted at their Lead Street Bakery premise. I personally am not a fan of their coffee and does not have the depth compared to other beans that are on offer in Wellington.

Overall I really liked the TKFC Burger. It was really nicely cooked and the combination of items in the burger worked really well together. However, Mulan and her friend’s fried chicken which was in the burger was slightly under cooked and had to be returned to the kitchen. Even though they got replacements and Ti Kouka apologised for the slightly raw chicken, they really liked the burger that it was really no big deal.

I want to rate the burgers I have eaten. However, it becomes quite complicated as there are still other burgers to try. So my order from the favourite to lest favourite is;

Beautiful B’day dinner @ciciocacioosteria
When it is family yum cha, we don’t do it in halves and we take it very seriously. Especially if we are there to celebrate something. The name of the game is how high you can stake the bamboo steamers before you take them away. In the second picture there is three but I am pretty sure we got to seven maybe eight.
Made it to the @friedchickenfestnz. I have to say it was a very interesting concept and see why it is a success but I am not entirely sold on it. I love the concept and love being able to eat the different styles of fried chicken but I feel the vendors could have brought more of their “A” game. I thought Salty Diner was the best vendor out of them all, FYI
Found out that Tiger also do a dry version of their Malatang. To be honest, I cannot stop thinking about this place as it is so good and I had discovered another reason to go have it. I went with mild in spice and that was a slight mistake. It totally kicked my ass, but I have to say the dry version is not as good. Not as much flavour and actually just pure spice. Stick to the soup version I reckon.
Oh the hot chocolate @scopacubastreet
Big Breakfast @seashorecabaret
Fish burger @freskosupplies and some calamari.
So lucky to get some kaimoana: pāua. Interesting that pāua is not pronounced "pawa" it is more like "toe" but with a "p".
If I have not said this then I will say it now. The mapo tofu at @_kccafe is legit and the best in town. It is just so good.
Chicken and Waffles @orleansnz