Had a list of places that I wanted to try during Wellington on a Plate 2016. One of these places was Five Boroughs. I have eaten here numerous times but wanted to see what they have as their Burger entry for Burger Wellington. Five Boroughs did well in the competition last year and were one of the five finalists for the Burger and Beer match and also for just their burger.

I was actually surprised to see what came on the plate. It actually looked like a KFC meal, plainly because of the bread roll which I was not expecting. However, the presentation of the burger was very good and looked appetising. The bread roll was nice and tasted like the bread roll you get at KFC but fresher and tasted as it had less preservatives. The potato gravy was really nice. The mash was very smooth and the gravy had a nice deep meaty taste to it.

The burger was nice but was very full on. The crumbed turkey breasts were nicely cooked, crisp and was not oily. The chicken bacon was good and the duck liver parfait was very nice but was quite full on.  Also in the burger were gherkins which added a freshness to the burger. However,  eating the burger with cutlery after trying to eat it with my hands, it did seem like I was eating a chicken parmigiana without the cheese. Also when I was nearing the end of the burger, I finally realised how rich the burger was due to the duck parfait. 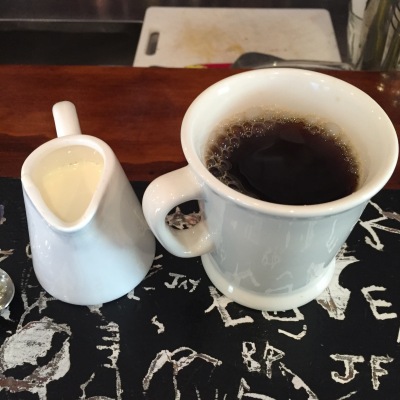 As I was here for lunch, I also decided to have their bottomless filtered coffee. The use People’s Beans and brew a single origin bean. Overall was a nice brew and did ease the richness of the burger.

Overall a good burger but a bit too rich for me. They really needed something to tone the richness of the burger down. I also heard a few people think it is a bit too salty, but for me, I thought it was alright but it did need some tomato or lettuce to tone it down a bit.