MacGyver has never been to Five Boroughs and I was rather surprised at this discovery, so off we went with Pepper Potts in tow. I have been several times but have never had their Fried Chicken and since Concrete Playground labelled it as one of the best in Wellington, I decided to order the chicken and give it a try.  We had to wait for a table but they do move rather fast.

I received two pieces of chicken and was rather surprised that I received a wing piece, but I was still a big piece with quite a bit of breast meat attached. The Chicken was obviously dusted with the hot and spicy seasoning, which I was slightly disappointed with as I thought they would have mixed it into the batter. Also, I was surprised to see how dark the chicken was. All that aside, this was good fried chicken. It was seasoned nicely and had a good kick to it. Both pieces were nicely cooked and were moist. The maple mayo went really nicely with the chicken and was nice to see a piece of cinnamon bread at the bottom. 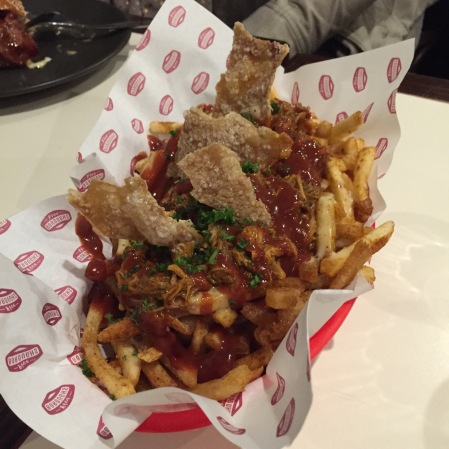 This dish is part of Five Borough’s secret menu. I think the fries were dusted with the same hot and spicy seasoning as my chicken. On the fries were cheese sauce, pulled pork and barbeque sauce. Also added to the fries were some pieces of pork crackling. Overall this was really good. Was slightly over seasoned with salt but was a great dish of fries.

Pepper Potts ordered this dish and all three of us decided to share it. Pepper Potts had had this dish previously and knew as soon as we sat down she was going to order this either for dessert or as an entree. I have never heard of deep fried Oreos but they were not bad. They were soft and the caramel sauce was a nice addition. The bacon dust you could see but was hard to taste. The ice cream was good and went well with the Oreos, but I ended up eating it with the caramel sauce.

Even though I have been here numerous times, I actually think it has gotten better and since it has been around for some time it is being a bit more adventurous with its menu and by being more authentic in American cuisine. Even though I did like the fried chicken, it was not the best I have tried. However, if you are thinking about where to get the best fried chicken in Wellington, places are limited. I will, however, need to go back and try their buffalo wings.